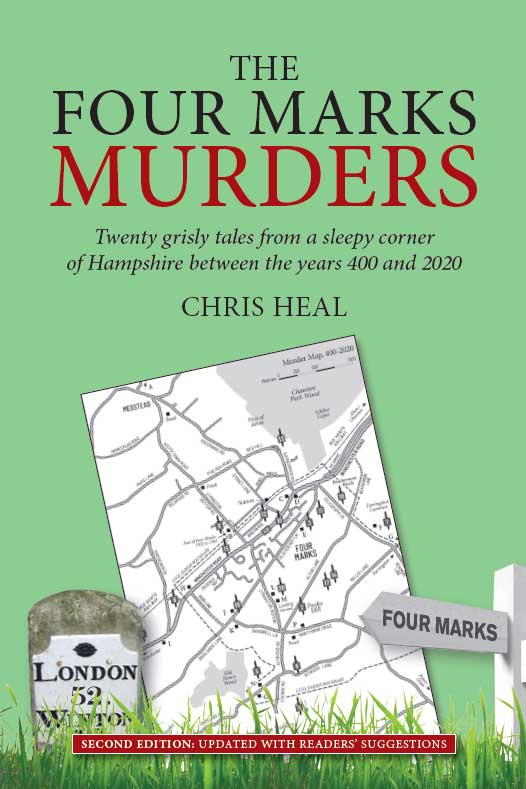 Twenty grisly tales from a sleepy corner of Hampshire between the years 400 and 2020.

This book is about a large number of deliberate or untimely deaths in what was thought to be one of the quiet backwaters of Hampshire.

In this true-life thriller, Chris Heal investigates twenty local murders beginning in Roman times, over half of them since 1900 and three within the last few years. They are all here: drug runners, people traffickers, robbers and smugglers; killers of animals, of babies, young children and the senile; those who planned revenge and sought the righting of wrongs; battle slaughter, corruption in the legal processes and mob rule.

‘I don’t hold a magic magnet for attracting this sort of information but you will understand that once you start asking, once you start looking, then people start talking. Odd facts jump out from unrelated pages and take new meanings. People brood for a month or two, then make contact. Collecting murders is like rolling a snowball.’

In the conclusion, Heal asks why Four Marks is the murder capital of Southern England.

Using careful research, the history of the village is revealed. From prehistoric times, Four Marks was an empty squeeze point on the road north. Formed in 1932, it lacked the heart of a medieval village. Its scrub wasteland was only lately filled by a population with far-flung roots. As well as exploding cherished myths, Heal uncovers a surprising secret that links local development to both a great political movement and one of the UK’s largest corporations.

Gripping and sometimes gory, fascinating historical tales brought to life, along with the odd ‘skeleton in the cupboard’. Written in a style that makes you want to read both the next page and the next story. To quote Mark Twain ‘truth is stranger than fiction’ and in this meticulously researched book, it’s quite a challenge to try to determine which is which.

An exciting read. Left us fascinated and curious about the history of the village and drama in our own house! Plenty of ‘dinner party’ conversations and tales within.

I am a native of Four Marks. I found the information in this very readable book fascinating. For me, it reinforces that Four Marks is a special place. Everyone in the village and around should buy a copy.

If you are interested in Four Marks, you should read this book. There is a lot to learn. The mixture of historical material, personal reminiscences and what I think may be fiction is very well done.  In places I found myself wondering where one ended and the other began.  The material on population growth at the end is very interesting: it must be the first time anyone has done anything like this in a serious way.