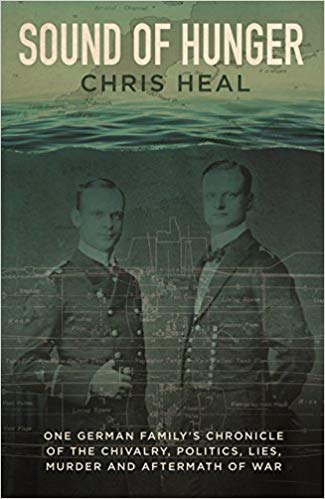 Sound of Hunger is an acclaimed social biography of the lives of two brothers, Georg and Erich Gerth, WW1 u-boat captains, set against Germany’s political and militaristic development from Bismarck to Hitler. The Gerths’ lives and careers as navy officers are set against the military, political and social environment of their times. Carefully-nurtured myths of national innocence and guilt are uncovered; discrediting truths and war crimes of both the Allies and Germany are brought into the limelight. This is not conventional history, but a personal view of the events that were integral to the Gerth brothers, to see how they were changed by what they heard, were taught and experienced. The book is also a detective story: Heal’s researches led him to rediscover the wreck of UC-61 under the sand on the beach at Wissant, south of Calais, and to reintroduce its history in a packed conference to the village’s inhabitants. He also found, interviewed and reunited the brothers’ descendants in Bavaria and the United States.

Plaudits for Sound of Hunger

The depth and breadth of this book is staggering. You would have to read a dozen others to get anywhere close to what’s given you. The author wants you to know that WW1 was not won by the titanic slaughters, but by the slow starvation of the civilian populations of Germany and Austria. This is mature erudition from a man of three score and five who has produced a magnum opus to which I say, ‘Bravo, Sir.’ This is the kind of book I love because as soon as you finish it you start reading it again to see what you missed and enjoy it all over again.

This handsomely produced volume will be recognised as a distinctive and valuable contribution to the history of the First World War. Its author has been very careful in his research and shows both commendable levels of objectivity combined with real imaginative sympathy for his subjects. This is gripping stuff and should not disappoint its audiences. Four years into the publishing jamboree that is the War’s centenary, here is a title that stands out and deserves its place on (and one hopes frequently off) the shelf.

Chris Heal’s writing is densely packed with a wide variety of subject matter that flows thick and fast, but it rewards the reader with a deeper understanding of this critical period in German and European history. It covers events that are usually recounted at the national and international geopolitical level. It is much rarer to have a social, family and personal viewpoint and that is why Sound of Hunger makes a valuable contribution to the current literature.

A major contribution to WWI military history … excellent work … the author writes extremely well and his style is both lucid and engaging … such a scholarly source book is a welcome addition to my bookshelf … an objective, dispassionate foreigner’s view of German history.